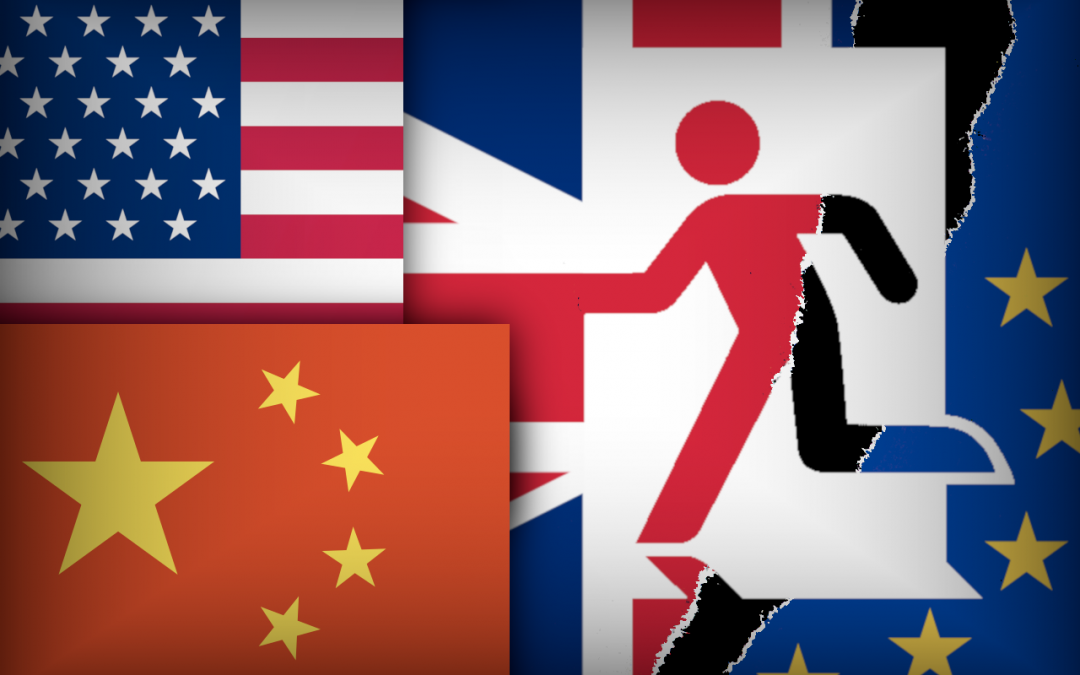 It’s Official. The UK will be leaving the EU on 31st January. And with just 11 months left to agree a new UK-EU trade deal, businesses must act now to avoid the worst effects of an inevitable ‘No Deal’ Brexit.

This now confirmed ‘Cliff-Edge’ has led Colin Rainsforth, Director of Absolute Advantage to call on UK businesses to act now by exploring the fast-growing markets of China and the US, which will be unaffected by the changes Brexit will inevitably bring.

The Conservative Party’s landslide victory in December’s general election has removed any ambiguity over Brexit. After more than three years of negotiation and political wrangling, the UK will finally be leaving the EU on 31st January 2020 – “No ifs. No buts” – marking the start of an 11 month transition period during which the UK and EU will continue to trade freely.

But the second, much tougher, stage of Brexit hinges on forging a comprehensive UK-EU Free Trade Agreement, where both sides will need to agree future cooperation on trade, security, immigration and a raft of other complex issues once the transition periods ends on 31st December 2020.  And with Boris Johnson having ruled out any further extension to agree such a deal, it seems certain that the UK will ultimately lose access to the EU’s single market and customs union at the end of the year, placing many UK Food & Drink producers in serious jeopardy.

“Johnson has left himself just 11 months to strike a new trade agreement with the EU that has taken others around four years” notes Paul Dales of Capital Economics, an economic research consultancy based in London.

“Given the refusal to extend the Implementation (transition) period beyond 2020 and the obvious lack of time to negotiate a Free Trade Agreement before then, this means we will be on WTO terms by January 2021” said David Gauke, former Justice Minister under Theresa May’s government.

While many will interpret this as nothing more than political theatre, the reaction in Brussels indicates that the Prime Minister’s message had been received loud and clear.

“Given all the signals… we are well advised to take seriously that the UK does not intend to go for an extension of the transition and we need to be prepared for that,” said Sabine Weyand, Director-General of the EU’s trade department.

The worst effects of this ‘Cliff-Edge’ are already being felt on both sides of the Channel – creating a hostile environment for food and beverage producers eager to expand into neighbouring EU markets, as buyers become increasingly reluctant to invest in emergent UK brands.

“We’re seeing a growing reluctance among European buyers to begin stocking new UK brands due to the inevitable but unpredictable changes in market conditions” says Colin.

“In China and the US the opposite is true. British products are highly valued by Chinese and American consumers for their premium quality, style and branding – commanding substantially better margins for retailers and producers alike. The opportunities far outstrip those available in Europe right now, and brands need to look to these alternative markets to offset the effects of Brexit rather than relying on EU markets where they will undoubtedly be facing increased costs, with strictly enforced and complex barriers to trade.”

Samantha Mobley of International Law Firm, Baker McKenzie, agrees: “Given the challenges associated with a hard Brexit scenario, companies would be well-advised to seek more open growth strategies – particularly if they are heavily dependent on the EU at present. For every sector, the US offers the greatest opportunity. China is the second-biggest prize.”

Working directly with major retailers in China and the US, Absolute Advantage provides a unique partnering solution for British food and beverage brands seeking to quickly establish substantial, long-term export trade into these traditionally difficult-to-access, but highly lucrative markets.

Using their established relationships, expertise and key understanding of these markets, Absolute Advantage successfully fast tracks brands into major overseas retailers within 3-6 months – in sharp contrast to the market average of 3-5 years.

Colin expands: “Our unique market entry strategy enables food and beverage brands to start exporting to new overseas markets in months rather than years, and with bigger margins than can be achieved through conventional routes. With the cliff-edge fast approaching, our short turnaround will be key for our clients to begin trading in China and the US before the worst effects of Brexit set in.”

The Absolute Advantage team has developed a more efficient, less complex way to enter export markets, creating substantial long-term opportunities for mutual benefit without sacrificing margins to intermediaries. They’re obsessively passionate about it, and their mission is to help you achieve it – and fast!

For more information or to begin exploring opportunities for your food and drink brand in China and the US, go to: www.absoluteadvantage.co.uk or book a call with our team.

Are you ready to start exporting?

We’re currently closing over £280 million in sales and have buyers waiting to buy in China, Europe & the US. Talk to our team to get started.

Any cookies that may not be particularly necessary for the website to function and is used specifically to collect user personal data via analytics, ads, other embedded contents are termed as non-necessary cookies. It is mandatory to procure user consent prior to running these cookies on your website.